The Assassin’s Creed franchise has come a long way from its original entry back in 2007. With Ubisoft gradually changing the formula every time to keep things reasonably fresh. Odyssey is a stark contrast from its roots, whether that’s for the better or worse is up to your own opinion. Set during the Peloponnesian War in Ancient Greece, it retains the changes to combat and open world design made in Origins. By adding enough small changes, refined ship mechanics, whilst taking inspiration from The Witcher 3: Wild Hunt, it’s clear that this is the most ambitious title in the series.

You’re thrown straight into the thick of a large battle playing as Leonidas. It’s an impressive introduction that, while the framerate takes a hit playing on the Xbox One, clearly under strain, this gives a nice sneak peak of the big conquest battles that will appear later in the game. You’ll soon be able to pick between either Kassandra or Alexios as your playable character. This is the first time in the series where you can choose to play exclusively as a male or female protagonist, while introducing the player to one of the many choices you will have to make throughout the game. The overall story is pretty good, playing as a journey that will take you across ancient Greece to find your missing family. I played as Alexios, and the voice acting was generally strong with some parts sounding less than impressive. There were plenty of strong story beats that were pretty emotional, while also developing Alexios as a character. By the end of the story I can honestly say I was quite attached to the characters, Alexios in particular. What’s better is that the present-day segments are far and few between, I was only ever out of the animus about 2 or 3 times in total and to be fair, they weren’t that bad and gave you extra lore information if you really wanted it. 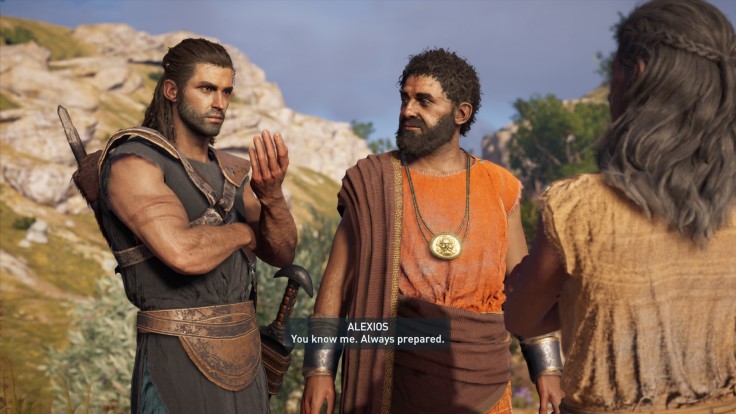 The many characters that you’ll meet across Greece are mixed in quality. Some of the standouts are Sokrates, the well-known classical philosopher who’s just as confusing and going on about philosophy in as many situations as he can. He is a true joy to come across in quests. Or Alkibiades, the suave man you interrupt in a private situation and from that point on, tries to seduce you every chance he can get. He is such a character, very memorable and there are quite a few hilarious moments when he’s around. Now, not every person you meet is great and well written, there are many characters that you will instantly forget just because they aren’t very interesting, or the voice acting is utterly poor. It is a mixed bag to say the least, but this is common in many open world games, so it is to be expected.

The combat has been refined and improved from what it was in Origins which I thought was satisfying then. Although the general mechanics remain the same, requiring you to actually take into consideration your weapons reach and where your placed around the enemy to deal more damage. Instead of filling up a gauge that allows you to perform a strong attack depending on the weapon type, you now unlock a range of abilities that cost specific amounts of the gauge that fills up every time you deal damage. It definitely adds more of an RPG style system which is much appreciated. Speaking of which, the stats-based loot system is back and largely remains the same as it was in Origins, although there didn’t really need to be any changes as it was fine how it was. However, some may not like this system as you will constantly be required to switch out your equipment for higher level stuff, otherwise you will be underpowered. Although you can upgrade your equipment to the current level, it costs a lot resources especially for legendary gear, so it is better to save it until you reach the max level to choose the specified gear to upgrade.

Ship combat has also been given a key focus like in Black Flag, receiving small refinements from the limited ship combat in Origins. It is the most fluid it has ever been, with a range of upgradable and customizable parts. It’s the most fun I’ve had in using the ships in the series. However, being forced into combat by other ships can be frustrating, particularly when I was just trying to dock at an island. I was just about to reach it when an enemy spotted me, and I was locked out of leaving the ship until I had either decided to flee the area or sink the ship. But the enemy ships were never too difficult to be too much of a hindrance.

I had mixed feelings towards the mercenary system, sometimes it was a fun addition whereas there were many a time where it was just frustrating and a nuisance. I couldn’t silently raid a camp or base as a mercenary would somehow be able to pinpoint my location and disrupt what I was doing. You get a bounty pretty easily, which causes mercenaries to hunt you down. You could either get rid of the bounty by eliminating the person who placed it on you or you can pay it off in the menu. The former can often be too much of a hassle and waste of time to do so I paid it off most of the time which cost a lot of money cumulatively. Mercenaries often drop rare gear, so there is a definite payoff to killing them. Finding clues and hunting down all the cultists was a neat little feature, that helped to add more interesting content to the game. This required you to locate clues that would lead you to where a cultist is located. You’ll soon find the higher ranked members until you find their leader. It wasn’t anything game changing, but it was a welcome addition none the less.

Side quests overall were decent, this was helped by an improved dynamic camera placement which helped to ground the player into the experience more than what the static camera did in Origins. While there were plenty of interesting stories in these quests, there were also a fair share of boring, redundant and repetitive fetch quests that many open-world games have. Interesting characters and stories do help to alleviate this somewhat.

One thing that does stand out is the world and culture. This an incredibly beautiful game, even on the base Xbox One. The calm blue shallow waters, vibrant small Greek Islands and towering mountains make this an even more graphically impressive game than its predecessor. This did cause framerate drops at times, even more so in the large Conquest battles where there are plenty of things happening on the screen. But it was never as big an issue that really detracts from the experience.

As a huge fan of Greek Mythology, I loved the inclusion of mythological creatures for the player to face off against as a late game activity. Although it might seem strange for this to happen, the game does give an explanation as to why they are there. Fighting Medusa, the Cyclops, the Minotaur and solving the riddles set by the Sphinx was so enjoyable and were some of the toughest challenges the game has to offer.

Assassins Creed Odyssey was an ambitious project, and for me it succeeded in many ways. Its varied combat, refined side quests and naval combat were great and helped make my time in the gorgeous Greek Isles fun and memorable. Although there were issues with some repetitive quest design, performance and the frustrating mercenary system, this game was very enjoyable and has become one of my favourite entries in the franchise.

What are your thoughts on Assassins Creed Odyssey, did you like it or not? Let me know in the comments below, I’d love to hear what you think. If you enjoyed my review, please like and share it. If you want to see more of my content, consider checking out some of my other posts. Thanks for reading.