Before 2015, I wasn’t a fan of the Witcher series. I didn’t know the games were based off of books, I never played the original and I was indifferent to the second game Assassins of Kings. I didn’t understand what was really going on in the world and the story, where the only thing I really liked was the characters. To say The Witcher 3: Wild Hunt wasn’t on my radar is an understatement. It wasn’t until the final trailer was released did I start to get interested in what it had to offer, a story focused, character driven open world game.

By this point, and still today, the industry is drowning in open world games. Where much of the time, developers put more focus on quantity rather than quality. Furthermore, there were not many open world games that put a focus on narrative and characters. Bethesda used to be known as the king of open world games, however for many, they have lost that reputation over the years, tracing back to Fallout 4. Bethesda had a certain exploration focused formula that, in my opinion, was run into the ground. They knew in the past it had worked, therefore, they didn’t try to evolve and really change anything about how their games played. Fallout 4’s narrative was interesting at first, but it ended up being quite predictable and lacklustre, culminating in an abrupt and anticlimactic ending. Side quests, except a few standout ones, were mostly dull fetch quests or location clearing missions with little narrative effort. For me, the game felt rushed and the lack of quality was made even more obvious when 6 months prior, The Witcher 3 released, setting a new standard for open world games, on a relatively lower budget.

While it’s not perfect, no game is, The Witcher 3 succeeds in so many competing areas, which make it a truly masterpiece in design. Let’s start with the story and characters. While it begins quite simply, playing as Geralt you need to try and locate Yennifer, his ‘soulmate’ for want of a better word. However, when we finally catch up with her things take a much different turn, with you having to find Ciri who’s on the run from the deadly Wild Hunt. You must track her across the continent, in an interlocking narrative full of twists and turns, heartbreaking moments, chilling encounters and thrilling fights. It’s a brilliantly written story that kept players hooked right till the end, where at its heart, would not be the same if it wasn’t for the incredible cast of characters that inhabit the world.

Geralt is such a smartly written character, who’s a morally ambiguous individual who can change depending on the choices you make. While Witchers are known for having no emotions, Geralt can be empathetic when he wants to be, caring about those close to him such as Dandelion, Tries and Yennefer, among others. He’s never far from saying witty or sarcastic response with perfect timing, which gives him such an endearing personality. I could spend the entire post going on about all of these memorable characters, but I’ll just mention a few others. Triss is brilliant, courageous, kind-hearted, but tough when she needs to be. She puts her life on the line to help get the other mages out of the city of Novigrad, where a witch-hunt is taking place, something we witness in gruesome fashion when first arriving. Dandelion is a delight in every scene he’s in, a charismatic bard that gets into trouble too much, relying on Geralt to help him out. He is the complete opposite to Geralt in practically every way, but their dynamic is perfect.

For me, the main narrative and characters are what make an open world game truly memorable, it’s what keeps me playing right to the end. It’s perhaps the main reason why Skyrim ends up feeling quite bland and lifeless in comparison. While I love its world and lore so much, the story was pretty bad with not a single interesting character in it. The final boss fight is something the player has fought likely 20 times at least before, with pretty much nothing to distinguish it from those prior dragon fights. This is something that The Elder Scrolls VI needs to work on and fix, and could take cues from The Witcher. Otherwise, it will just be another exploration focused game that fades in people’s memory not long after finishing. The only open world games that have come close to The Witcher in terms of story and characters is Horizon Zero Dawn and Red Dead Redemption 2.

Arguably the greatest accomplishment that The Witcher 3 made was the fact that despite being a massive open world, it was full of exquisitely crafted side quests of such high narrative quality that I made sure to complete every one I could and still wanted more. No other game before or since has made me have the drive to do that. The side quests were, 90% of the time, engaging and interesting with diverging narratives and choices that reward repeat playthroughs. So much attention to detail and time had gone into making every quest and Witcher contract feel worthwhile and not a simple fetch-quest with next to no story value. There was so many incredible and memorable moments that have stuck with me that no other open world game has done. The Bloody Baron quest-line was an emotional and brilliant story, The Tower of Mice was a haunting, gruesome and thrilling mystery. But for me personally, the quieter, sombre moments can be the most impactful, which is why Priscilla’s song is perhaps one of my favourite moments in the entire game. Everything from the song and its lyrical meaning, to the people’s reactions and Geralt’s in particular, slowly realising its about him and Yennefer, is so perfectly done. Like the characters, I could go on and on about all the phenomenal quests this game has.

It’s no wonder that since its release, more and more developers have tried to put focus on the narratives of their side quests. Assassin’s Creed Origins and Odyssey have really stepped up their game when it comes to story in side content. This has really improved the overall quality of these games although they still don’t carry that same level of care and detail that the Witcher has. RDR2 and Horizon Zero Dawn have similar interesting side content, although the former succeeded more in my opinion than the latter. One notable open world game for me that didn’t really succeed in its design was The Legend of Zelda: Breath of the Wild. It felt like a huge step down from previous games like Twilight Princess which actually had a good main story and characters. BotW’s side quests were terrible to be honest, the majority had no real narrative and were simply “collect 40 iron ore” or “defeat x amount of enemy.” This is accompanied by copy and paste content, particularly boss, dungeon and mini shrine design. I still don’t understand why it was delayed so much when it felt so rushed and empty.

Now I can’t make a post about the importance of The Witcher 3 without discussing its masterpiece expansions, Hearts of Stone and Blood and Wine. The Shivering Isles from Oblivion was my favourite piece of DLC up to this point, where its crazy world design, story and characters made it such an unforgettable experience. However, I think both of the Witcher’s DLC have surpassed it. Hearts of Stone features a more compact story driven experience that includes some of the best quest lines ever made in gaming, alongside one of the greatest antagonists I’ve ever seen. The party mission, haunted manor mission, right up to the final sequence with Gaunter O’ Dimm, is pure masterful in its execution. Blood and Wine was a huge expansion that took me roughly 25 hours to complete, longer than a lot of full priced games and the same length as some RPG’s. Touissant is perhaps one of the most visually beautiful locations I’ve ever seen in a game, where the lush, green fields, gorgeous and colourful city all work to make this a great location to explore. The story was excellent, the new characters were great and the side content was once again top-notch. This was all for the price of just £15/16 when it launched, which was so much cheaper and worth your money that other full price games. 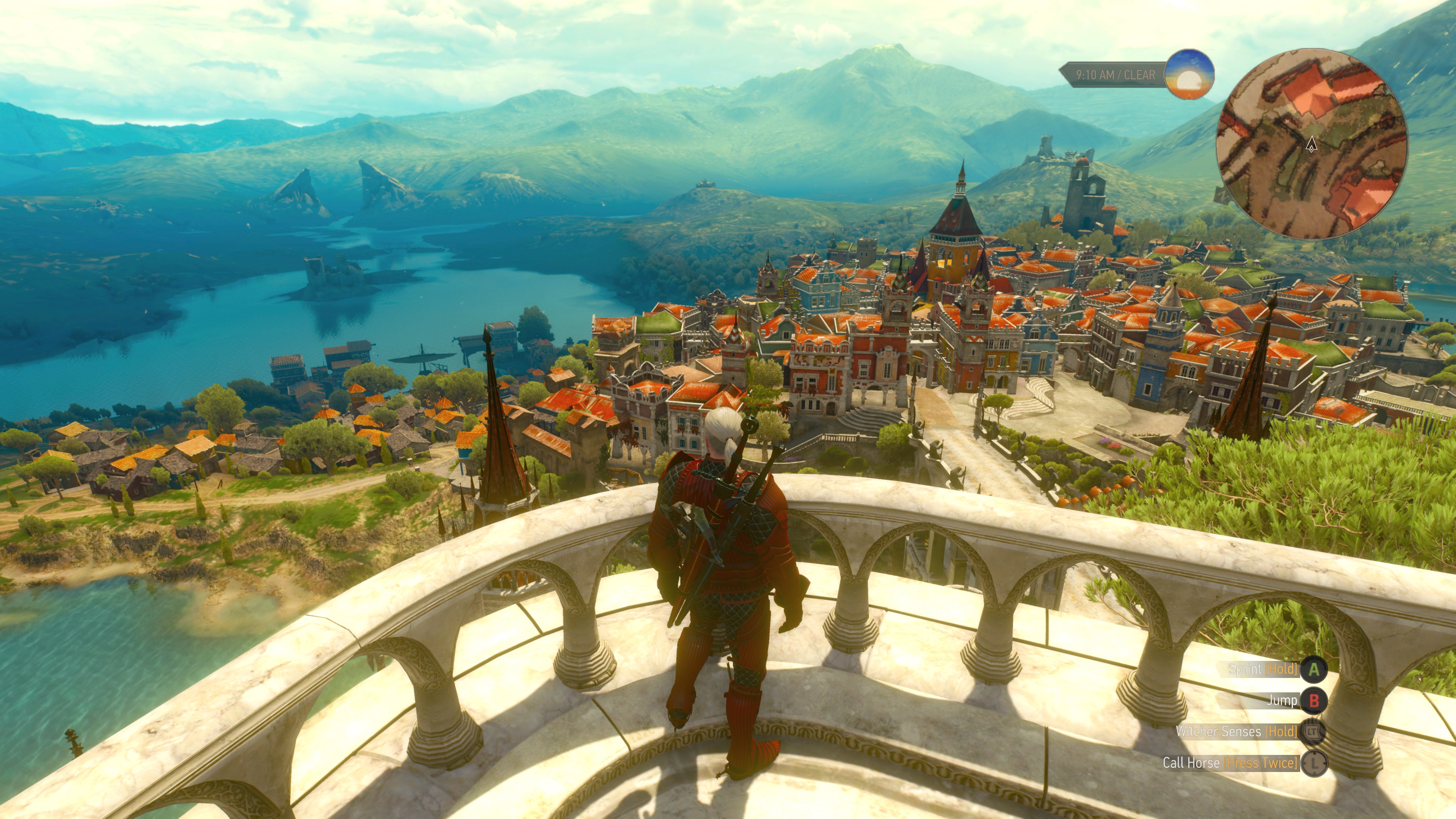 Now, while I have been showering the game with praise so far, I do want to mention the faults I had, which are admittedly few. The opening 5 hours are a bit slow, but once you get passed the starting area of White Orchard, the game really ramps up and hooks you in. Geralt’s movement can be a bit awkward in tight spaces like indoors, but its nothing too bad. Your horse Roach could be the most frustrating thing at times. He would get caught and randomly come to a complete stop when there was nothing in the way, this could get very annoying in races, especially the final one (that bloody bridge was the death of me). Finally, unless you are playing on hard (my second run) or hardest difficulty, potions and oils won’t be that necessary unless on the odd contract monster.

The Witcher 3 was such an important game. It was a modern masterpiece that proved that an open world game didn’t need to sacrifice quality and detail in order to fill the world with enough content to keep the player busy. It made a huge impact on the industry, where future games in the genre took inspiration from it, putting more focus and care in making sure that side-quests were not simple with little narrative worth, but truly memorable aspects. These are the reasons why the game receives the praise it does and why in my opinion, even over 4 years on, has yet to be surpassed by others. It was an open world game with the same level of detail and care that linear games have. I cannot wait so see what CD Projekt Red are able to accomplish with Cyberpunk 2077, a game that looks to continue the high standards and bar set by the developers previous game.

Thank you so much for reading. These are obviously just my own opinions so I’d love to hear your thoughts down in the comments and your experiences with the game. I’m really enjoying the Witcher books at the moment as well and I cannot wait for the series to come out in December! For all things gaming, stay tuned to Honest Gamer.

9 thoughts on “The Witcher 3: Wild Hunt – Why it was so important!”