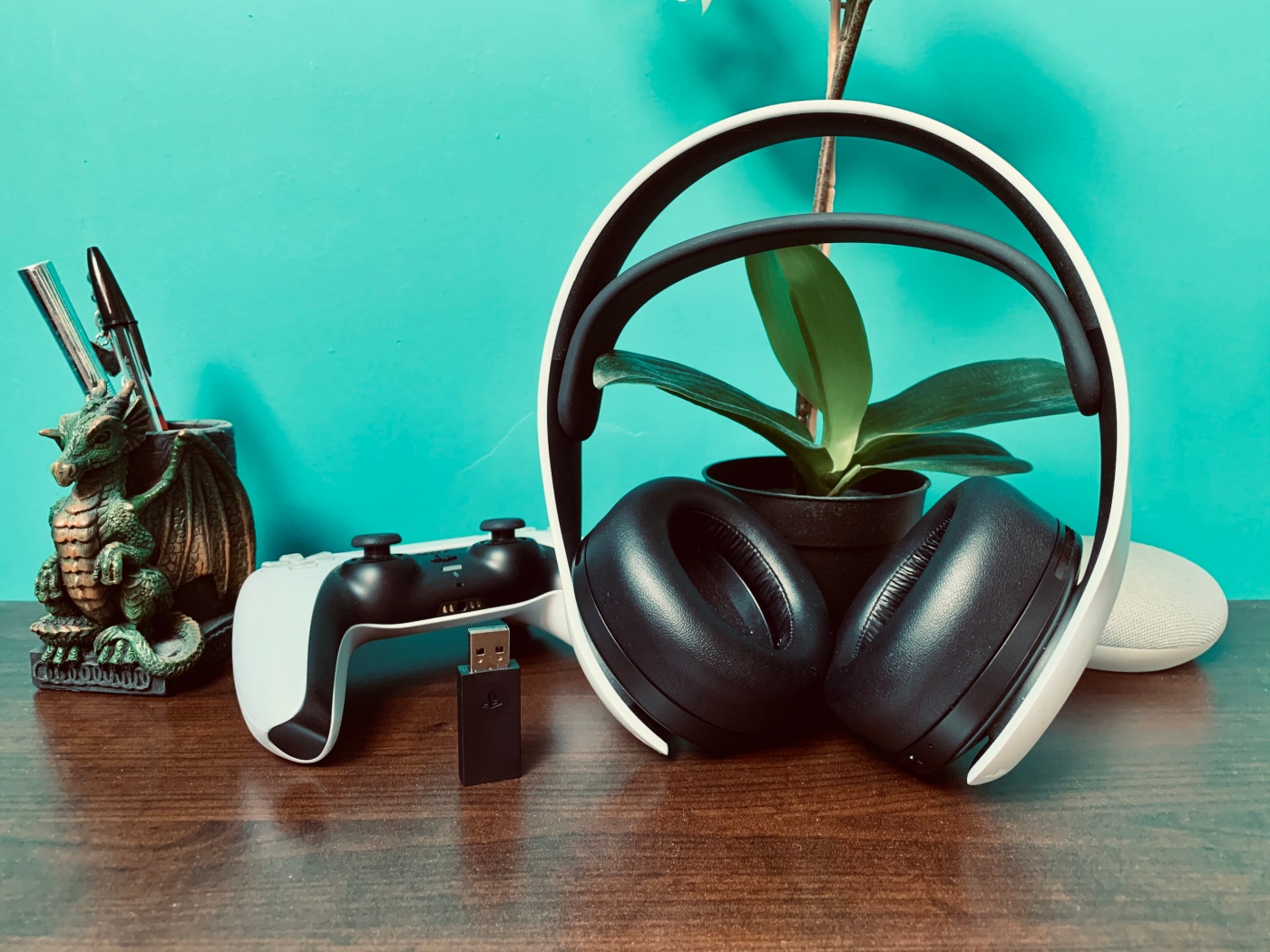 With so many different headphones on the market, it can often be difficult to know which one to buy, particularly if it will be mainly used for gaming. Sony have sought to create a perfect choice to put those agonising decisions to bed, with the Sony Pulse 3D Wireless Headset. Designed especially for the PlayStation 5, this headset aims to provide premium quality sound that takes advantage of the PS5’s 3D audio capabilities, while looking slick in the process. But does it come together in the perfect package, or is your money better spent elsewhere? Let’s find out.

The first thing that will immediately stand out is the overall aesthetic of the headset. It’s clear that it was designed to mimic the sleek and futuristic look of the PS5 itself. This means it blends in well within your gaming setup, looking right at home next to or nearby the console. I know it won’t be a big deal for everyone, but some might like to have matching colours or designs between their hardware and accessories. I really like the overall design of this headset.

There are plenty of buttons on the headset itself for you to alter settings, such as volume, chat/in-game ratio, muting the microphones, etc. Speaking of microphones, there are built-in ones that keep the design minimalist and bulk-free. Battery life is pretty solid, giving you around 10 hours of use on a full charge. This isn’t the longest among headsets, but it’s not really an issue as it will be more than enough for the average gaming session. It doesn’t take too long to charge either. Obviously, some people might not like white and other light colours as it’s easier to get dirty, but as long as you take care of it like any other piece of tech, it will be fine.

3D audio is such a brilliant aspects that really heightens the experience of games, regardless of genre. It gives you sense of depth and spacial awareness that isn’t possible with a basic sound setup. The benefits to immersion and atmosphere is hard to appreciate until you experience it for yourself. If you’re playing a horror game or another tense scene, the 3D audio elevates the entire thing so much. The PS5’s Tempest 3D AudioTech allows for a level of 3D audio on any game you play, but those that have been specifically optimised by developers sound much better.

Funnily enough, the 3D audio function is not an exclusive feature to this headset. Any pair of headphones will be able to get 3D audio, as long as it can connect via the 3.5mm jack on the DualSense or from a USB port on the console. Having said that, the level of quality will differ depending on the headset you’re using. The Pulse 3D headset was engineered specifically to utilise the feature, so will naturally sound better.

But how is the sound quality in general? For a headset with the price tag like this one, you’d expect the quality to be high. It’s a good thing that this is the case for the Pulse 3D Headset. There is a good level of clarity that allows for a super crisp, audio experience. It also blocks outside noise very well. Compared to headsets I used in the past that were around the £50-60 region, this sounds much better, with a good level of base and distinction, even when it gets busy in a game. You’re definitely getting a quality reflecting the higher price point.

Is it the best sounding pair of headphones I’ve used? No, but those that were better were more expensive in comparison.

When you look at comfort in things like this, it’s often tricky to gauge on initial use. The first couple of times I wore the headset, it was comfortable, but there were moments when the pads around the ear would feel like it was too stiff after 30 minutes of use. However, after I’ve used it for longer now, it has become a pretty snug accessory. It fits nicely over my ears, blocking out noise and even after hours of use, doesn’t become uncomfortable. As a glasses wearer, it can often be difficult to find a headset that doesn’t irritate me after short use, but I didn’t really feel that was a problem here.

The actual weight of headset is also surprisingly light. This meant that there isn’t really any pressure on the neck, allowing longer play sessions to stay comfortable throughout. Now you might be thinking that its build quality suffers as it’s lighter, but that just isn’t the case. It still feels sufficiently weighty and sturdy. It’s not perfect and I wish the ear pads were a tad softer, but it’s an overall cozy and satisfying feel.

What’s great for the most part about the Pulse 3D Headset is the ease of use. In terms of connectivity, there are a few options for you. The main draw is the wireless aspect, which can be used by plugging the wireless adaptor into one of the USB ports on the console. With that done, just turn the headset on and it connects. If you have no USB ports left for whatever reason, you can use the provided audio cable and plug it in via the 3.5mm jack on the DualSense. It’s simple and effective, offering options either way.

What’s also appreciated is the auto-adjusting head strap. Most headsets have you manually adjusting this to perfectly fit your head size, but you don’t need to worry about that with the Pulse 3D headset. Just pop it on, and it will easily fit snuggly whatever your head shape/size.

One thing I’m not a big fan of is the button placement. All of the buttons are located on a single side of the headset. With these all right next to one another, I find myself often pressing the the wrong button than what I wanted, especially since the volume and game/chat buttons are almost identical. It makes far more sense to just have a common use button like the volume one, on its own on the other side. This would make it so much more easier and precise to use.

I’ve been using the Pulse 3D Wireless Headset for about 25 hours now over a variety of different games and I can safely say that this is a great piece of kit for the PS5 user. The sound and 3D audio quality are excellent, with the build and comfort also being an overall positive experience. There are a few issues and it’s not the best headset I’ve ever used, but for the price of £89.99, you’d be hard pressed to find another pair that rivals it, both as a whole and specifically for 3D audio.

Thanks for reading and let me know what you thought in the comments. Stay safe and stay tuned for more gaming content like this.