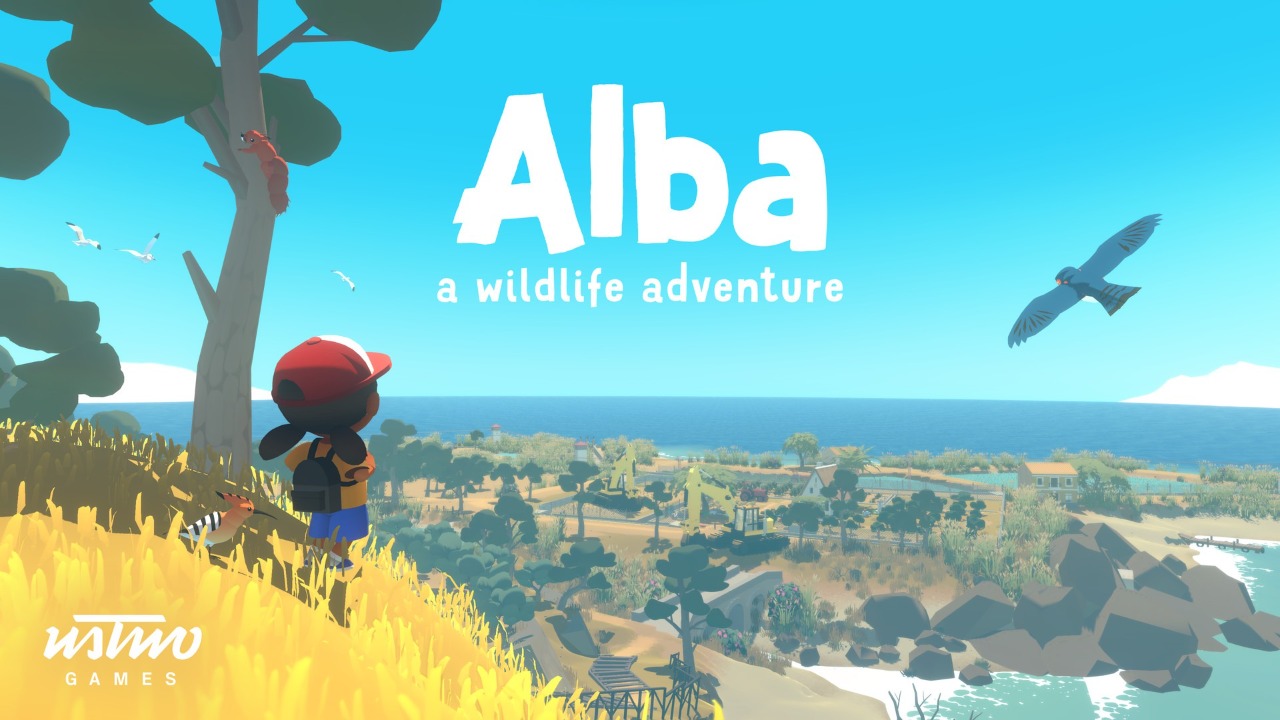 One thing that has increased in the public discourse over the last decade (the last few years in particular), is issues surrounding the environment and wildlife. With so many different people, groups and organisations offering their part in the discussions and to bring change, it only makes sense that video games would do the same. Developed by ustwo games, Alba: A Wildlife Adventure is a special indie game that boasts a holiday adventure like no other, with a powerful message at its heart.

The game opens with an adorable scene. A very young Alba is visiting her grandparents on a mediterranean island for the summer, as usual. While spending time on the local beach, near the nature reserve, they come across a rare animal while taking family photos. Capturing a snapshot of the illusive Lynx, the scene ends and we move forwards many years to the present. Alba is once again visiting her grandparents on the island during the summer. But this time is different.

After a handful of events – hanging out with her friend Ines, rescuing a trapped dolphin and finding out the nature reserve is being paved over and replaced with a luxury hotel – Alba decides to do something about it. With her trusty pal Ines by her side, they plan to spend the week gathering support to stop the hotel’s construction, while helping the local wildlife to prove its importance. If you aren’t uplifted and motivated by this premise, then I don’t know what will.

Taking place in a reasonably-sized open world, you’re left to explore the picturesque town and landscape, as you work to complete your goal of reaching 50 signatures for the petition against the hotel. Over the course of 5 days, you’ll complete a myriad of objectives in order to save the island from the encroaching dilemma. It’s a simple but effective premise, that will hook you in with its heartfelt sincerity.

A Charming and Important Narrative

For a lot of indie games, the story and idea behind them is what often stands out for the player, not flashy, high-budget visuals. This is true for those like Firewatch or What Remains of Edith Finch, and it’s certainly true here as well. Alba’s conservation mission for the island is surprisingly engrossing to follow and see develop. The story of a young girl being the conduit for decisive action and change in the community she loves, is deeply inspiring. That young idealism might seem naive at first, but proves to be what’s needed, as she soon sways the public to her cause over the 3 hour adventure.

The characters that make up the population of the island, also adds much to the experience and believability of the narrative in Alba: A Wildlife Adventure. I’m someone that often won’t really bother talking with a lot of NPCs in games, as they often repeat dialogue and don’t offer much in the way of real value, with some exceptions. But here, I made it my mission to seek out pretty much every NPC to hear what they had to say. Whether this was due to them having something for me to do, or just hearing their thoughts and response to what was going on around them. Their dialogue will change each day and some will move position on the island. Alongside distinct personalities and attitudes, it all serves to make this beautifully island feel alive and in turn, make the stakes of Alba’s mission more personal.

All in all, the story on display here is something beautiful and moving. The important message regarding conservation and wildlife and how it’s told, is handled with care and infectious integrity. It’s inspiring to say the least.

The game’s tagline, ‘small actions can make a big difference,’ is definitely apt for the nature of the gameplay, which is straightforward and sometimes too limited. As mentioned before, you’ll be exploring the island as you complete a number of tasks to gain the necessary signatures, as well as improve the landscape, after the woes of human actions. These tasks range from picking up litter, putting laundry away, (it’s not everyday some random kid goes around organising people’s laundry) helping animals in distress, fixing birdhouses and most prominently, taking photos of the local wildlife. As you might have already gathered, you won’t be doing anything demanding, which makes sense as you are in control of a child.

A lot of these objectives go towards the number of signatures you need to progress the game, so you’ll have to complete them, however seemingly mundane they are. While the majority don’t offer much in terms of interesting gameplay, a silver lining is that you won’t be tracking back and forth far, as the island isn’t too large. In addition, you’ll find and complete tasks without hassle as you just wander and explore all of what the island has to offer. In this way, despite the nature of these activities not being very engaging, I never felt particularly tired from them as they fit so organically into exploration. Do I wish there were some more intriguing and involved tasks? Yes, but it’s not a big deal regardless. It’s worth noting that the game won’t change to the next day until you’re ready. There are some main tasks to complete each day and then once these are done, you can go back to your grandparent’s house to change days, but there’s no rush if you want to still explore.

One gameplay feature I really like is taking photos of the many different animals that roam the landscape. Alba: A Wildlife Adventure features 62 different ones for you to seek out and snap a photo of. This is more than enough for the size of the game, and makes exploration fun and rewarding. With variations in how rare they are, it ends up being a surprising challenge to try and find them all. If you do struggle to find some of the rarer ones, it won’t stop you from enjoying the narrative, as locating every animal isn’t a requirement for completion. As you gather more photographs, it fills out your book, while these can also be used to repair observation panels in the world. It’s the strongest gameplay feature and the only tangible challenge for the player.

It may be a fairly simple game that doesn’t offer much in the way of complex mechanics, but it works to draw attention to what really matters, the game’s message.

An undeniably noteworthy aspect of Alba: A Wildlife Adventure, is the exceptional setting of the game itself and endearing visuals on display. This Mediterranean island brought memories flooding back of the many holidays spent in Spain when I was younger. So straight off the bat, I was already filled with that oozing sense of nostalgia. The island encompasses a surprising amount of variety despite the relatively small scale. From the sandy beaches, lush woodland, clifftop ruins, farmland, charming town, and more. There’s a good amount of detail at times as well, for example, the souvenir shop is cluttered outside with inflatable pool toys and the like.

In terms of the visuals, this is certainly a case of less is more. The simplistic, cartoonish style does wonders for the overall atmosphere and tone. I couldn’t help but just smile as I looked around the map and uncovered as much as possible. It may look simplistic, but it doesn’t stop the game from looking truly gorgeous, especially when the time of day would change to sunset. It’s an understated beauty that many will appreciate.

I have to mention the exquisite soundtrack that elevates the experience that much more. Imbued with that Mediterranean flavour, the music immerses you in the world and culture, only adding to that ever-present nostalgia. It’s a brilliant and subtle soundtrack (I’m actually listening to it on Spotify as I write this review).

If there is one area that dampened my experience with Alba: A Wildlife Adventure, it would be in the performance department. Playing on the PS5, the game crashed 4 times in that 3 hour playtime, more than you’d expect normally. Not only that, but it would regularly freeze for 5 seconds or more while playing, usually when interacting with something, like talking to a character. If it only happened on the odd occasion it wouldn’t be a problem, but it happened far more than it reasonably should. It’s a sizeable negative in an otherwise excellent experience.

Alba: A Wildlife Adventure offers a summer of fun I wish lasted longer. On a more serious note, ustwo needs to be commended. They are providing a narrative that acts as a commentary and plea on real world issues of conservation and the environment, all the while making it approachable to younger audiences. Not only that, it’s just a pure, charming and enjoyable little game that I recommend to anyone looking for a short, indie experience. Performance issues aside, there’s so much heart and thought gone into the game, alongside the inspirational message, that whatever positive actions you might do going forward, however small, can make a big difference in the end.

You can buy Alba: A Wildlife Adventure on the PlayStation Store.