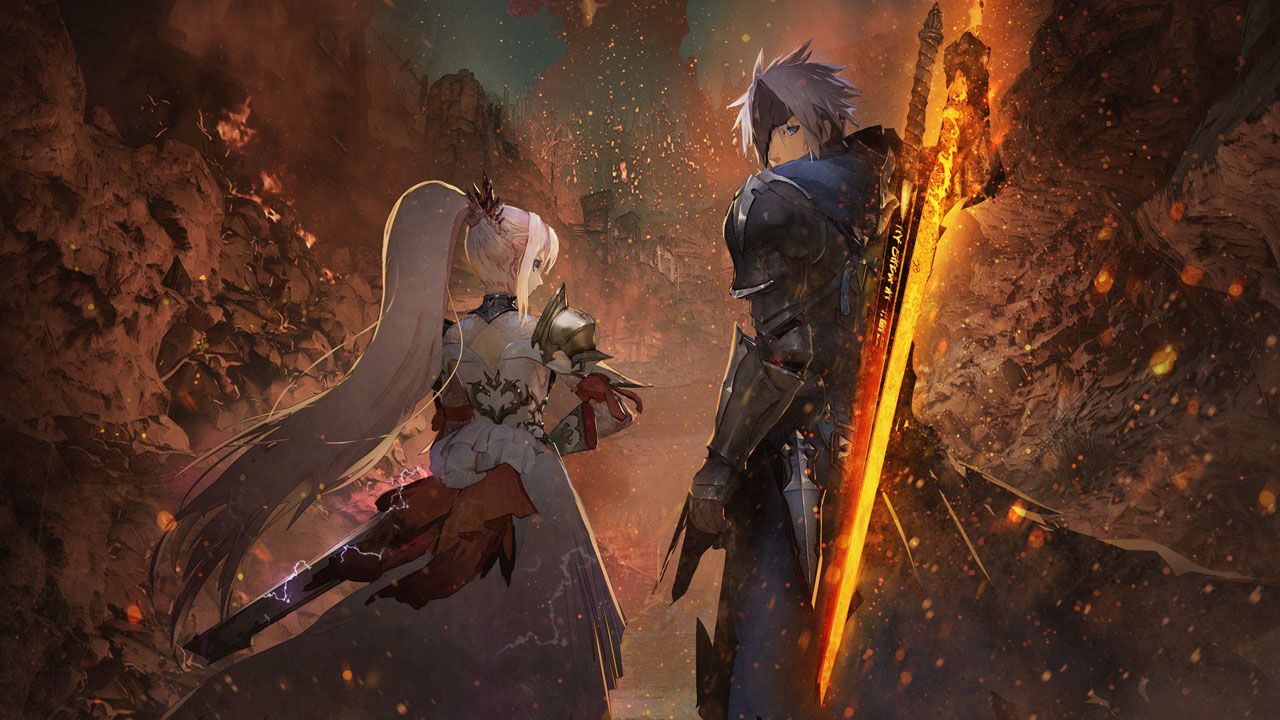 In terms of long-running JRPG franchises, most people – myself included – will immediately think of something like Final Fantasy. That’s a series that’s dominated the genre for decades, both critically and commercially. However, for the Tales games, they have paled in comparison when it comes to wide-spread success, despite the positive, critical reception. Tales of Arise might finally be the entry to break through to the mainstream, standing as one of the finest JRPG experiences of the decade.

If you’ve played any Tales game before, then you know what to expect. Set within a fantastical world with sci-fi elements, Tales of Arise takes you on an epic journey full of thrilling combat, emotional and dramatic storytelling, and a likeable cast of characters. There’s also an adorable owl called Hootle. What more could you need?

A Tale of Two Worlds

For three centuries, the people of Dahna have been enslaved by the Renan’s of Lenegis and their home-world of Rena. With Dahna being split and isolated into five realms, a Renan Lord is chosen for each. A regular ‘Crown Contest,’ is held to decide who will become the next Sovereign of Rena. Whoever can harvest the most astral energy, stored in the conduits called master called, is the next Sovereign. I loved the setting for this game, it blends medieval and sci-fi elements really well, so you get the best of both worlds.

In the beginning, you take control of a slave called ‘Iron Mask.’ A man with no recollection of who he is or his past, and cannot feel any pain. After soon encountering a Renan prisoner called Shionne – who has magical thorns that inflict pain on whoever touches her – as well as Dahnan resistance, the game really begins. Shionne and Iron Mask (later revealed to be called Alphen), soon set off on a journey to defeat all five Renan Lords and free the people of Dahna. Meeting various other protagonists along the way, Tales of Arise provides an epic adventure that rarely lets up.

The game does an excellent job at giving enough answers and explanations early on about the world and lore, as well as doing it in a natural way. However, it also makes sure to leave plenty of questions for the player to think about and keep them engaged. There are so many different plot threads that are weaved together with ease, especially in terms of the personal struggles and backstory of party members. Topics of slavery, privilege, and classism are handled well throughout, apart from some questionable dialogue and comments towards the end. Mystery, action, drama, and emotion, it has it all. Everything is paced so well and comes together in such a brilliantly executed package. But this 30-40 hour adventure wouldn’t be the same without the amazing people you meet along the way.

I have to say, I wasn’t a particular fan of the characters at first. Alphen seemed your typical righteous hero, Shionne was just constantly rude, while Kisara was a bit boring, etc. But they really grew on me over the course the game. As you learn more about them, you start to understand their situations and reasoning behind their actions. Their interactions with the world and others build them up, and they truly show such profound character growth that I was enthralled in their own struggles and journeys of discovery. While the true villain is nothing to write home about, the others you come across are more interesting and thought out.

If you’ve played other Tales games, then you’ll know how skits play a role in the storytelling. These are short, extra scenes that provide banter between party members about trivial matters, as well as reactions to major events. These are completely optional, but honestly, I recommend clicking the button prompt in the corner whenever they become available. They will give you a much greater appreciation of the party dynamics. They provide so many brilliant moments between characters and often give a bit of a break from the more serious tone of the main narrative.

On your journey of taking down the Renan Lords, Tales of Arise will have you traversing different areas across the world, from towns, caverns, forests, open fields, etc. Most of the maps are fairly linear in design, while a few are more open. These are filled with roaming monsters for you to fight or avoid if you wish, as well as materials scattered about you can use for crafting and cooking. They encourage exploration for chests and rare materials, as well as backtracking to previously inaccessible sections when you gain the necessary party skill to progress. Camp sites can also be found for you to reminisce skits you missed, as well as cook dishes for various buffs. Alphen can also spend time with party members for extra scenes.

There’s a fishing mini-game that unlocks after Kisara joins the party, which can be done at specific points in certain maps. You also gain access to a farm part way through to make more ingredients for cooking. These are small additions that help add bit of variety to gameplay, instead of just running and fighting. Many side quests are present and become available regularly. While most can be pretty boring and repetitive, such as killing a powerful monster or collecting an item, there are some that can be quite memorable. One quest line in particular has you encounter a man who wants to try recipes from every region. This leads to hilarious moments for Shionne and her adoration/obsession with food. I wish more were like that one, but alas, fetch quests are the norm for JRPGs.

Tales of Arise offers a strong amount of customisation options for your party. Each character can equip a weapon, a piece of armour, and an accessory. These can be found out in the world in chests, bought from shops or crafted yourself. The strongest equipment is made from crafting.

However, customisation extends beyond just equipment. Artes are abilities that are used in combat and will make up the majority of actions in fights. Characters start off with just a few Artes to use and set for quick access. But you soon learn more and more, with each character having countless, unique ones to choose from. There are just so many options for you to try out. Finding the right combination for you to focus on or change up for different scenarios, is experimental bliss.

Defeating enemies and completing quests nets you EXP and SP. EXP raises your characters’ levels, boosting their stats, while SP can be used to learn new Artes, permanent stat bonuses, and other skills such as faster AG recovery. Just another layer to the already deep customisation. There are also cosmetic items, such as outfits and adornments, that can be found throughout the adventure.

If there’s one aspect of Tales of Arise that stands out above the rest, it’s the combat. The demo really didn’t do it any justice at all. It’s satisfying, fun, and completely addictive. Taking place in real-time, you and three other party members face off against your enemies. You can use a basic attack with R1, as well as jump, dodge, or block.

The bulk of your attacks will take the form of your Artes. These require one or more segments of a character’s AG gauge to activate, which replenishes gradually while attacking and quickly when not. Chaining together various ground and arial based Artes, alongside basic attacks in between, keeps the combat very fast-paced and dynamic. Being aware of how much AG you have left is key, where you will want to take time to move around the battlefield so it can replenish, otherwise you’ll be left vulnerable to attack. Each character has an additional gauge that when full, can enact a boost-attack with the D-pad for impressive effect. You can even make use of the characters not currently fighting this way. Alphen has a unique power of sacrificing health in order to imbue his Artes with the power of flame for added power.

There’s much more to consider, such as the elemental strengths and weakness of enemies. If a certain area or boss has a common weakness, switching the Artes you have set will be beneficial. Enemies, especially bosses, can also have glowing weak points that stagger and make them more susceptible to damage when broken. You can even deal a finishing blow to most enemies if enough consecutive hits is dealt to fill a gauge, which is easier to pull off the lower their health. What makes the combat stay so fresh, is the fact that you can switch up which character you control. With each being so different in style, such as a tank, mage, etc, fights never become boring or repetitive.

From basic strikes, countless different ground and arial Artes, boost attacks, finishing blows; combat is deep, rewarding, and utterly thrilling. There are times where the difficulty can spike and feel like a brick wall. Having said that, I didn’t really need to grind in the main game, where just a change of strategy and Arte selection got me through. But there are difficulty settings if you want an easier or more challenging experience.

One thing that you will immediately notice if you’ve played other games in the series, is the significant leap in graphical fidelity. Tales of Arise is a gorgeous game that stands out with its vibrant art style. Environments are striking with plenty of visual flair. Every region is so different from one another, with the colourful palette doing wonders to empathise that fact. The warm-toned, craggy sections in the early game are harsh but beautiful. Snowy terrain and lush fields stick in your memory. Character models are of high quality and filled with emotion and personality.

Playing on the PS5 version’s performance mode still looks very sharp, while it keeps a pretty much flawless 60fps. The music is similarly stunning. That battle theme never failed to get me pumped for a tough encounter. If it wasn’t clear already, I adore this game so much.

When the credits rolled, I was completely satisfied with how the story ended, and I’ll look back at my time with Alphen and the gang with fond memories. Yes, the game doesn’t do anything revolutionary with its dramatic, end of the world style plot. However, that’s part of what I love about the genre. It may tread familiar ground, but it does that in a truly, exemplary way. The combat is nothing short of spectacular, being some of the best I’ve experienced in years. I have some minor grips, but the game’s sublime presentation and other aspects often made me forget what they were.

Tales of Arise is the complete package. It not only stands as the best in the series, but it’s quite possibly one of the finest JRPGs in over a decade.

You can buy Tales of Arise from the PlayStation Store here.

Thank you so much for reading!

One thought on “Tales of Arise Review”