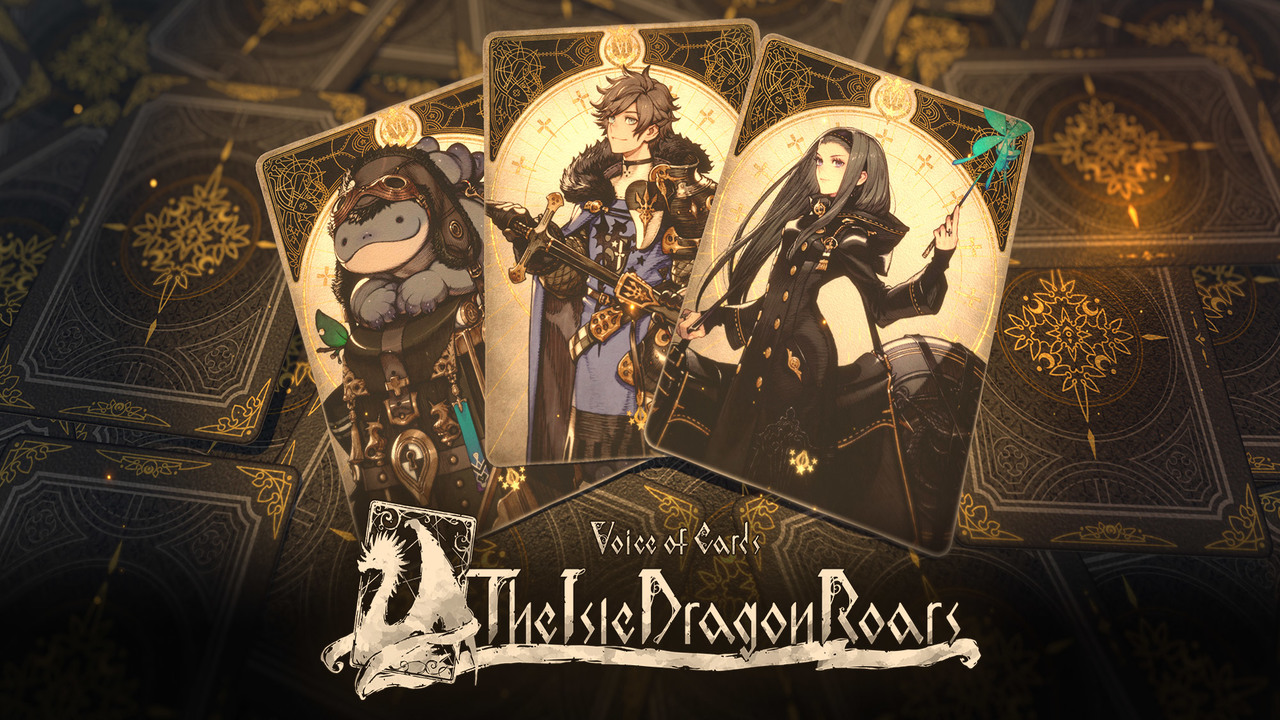 The RPG and JRPG genre is a pretty saturated market in the industry. Unless you can make it incredibly epic and high quality, it’s pretty tough to really stand out from the crowd, JRPGs in particular. If there’s one person who knows how to make a game stand out, it’s Yoko Taro, Director of acclaimed games like NieR Automata. That’s who’s behind Voice of Cards: The Isle Dragon Roars.

Voice of Cards is an RPG with a twist. Inspired by tabletop role-playing games like Dungeons & Dragons, you’ll take control of a party of adventurers on a fantastical mission. What makes the game so interesting, is that everything is designed with a card aesthetic. From people, monsters, items, to even the very environments. It’s definitely quirky, but does the experience lose its charm and feel gimmicky? Read on to find out!

Set in a medieval fantasy land, you’ll take control of a young adventurer (who you name) and his monster companion, Mar. It’s soon revealed that a vicious dragon is terrorising the Kingdom, and the Queen has promised a large reward for anyone or group who manages to fell the ferocious foe. Setting out on a journey to find and slay the beast, you’ll meet a number of interesting companions and face various obstacles to overcome in order to complete the quest.

On the surface, the narrative seems to be a pretty bog-standard fairy tale premise. However, in typical Yoko Taro fashion, there are some story developments later on that add more substance and put a spin on traditional fantasy tropes. It might not be as deep and thought provoking as other titles, but it definitely still makes the plot more worthwhile in the end. Not to mention, there are plenty of disturbing and heart-wrenching moments later on as well. The characters are solid if nothing memorable.

One thing that stands out – and I wasn’t sure how good it would be – is that there is no voice acting in the game. Everything is told and described through the words of a narrator. For me, it really worked here. It never feels annoying and overdone (looking at you Biomutant), and it genuinely gives the whole journey a more fun angle. This aspect also benefits from the excellent and sharp writing. Dialogue and general narration is injected with such brilliant humour and wit, that I was regularly left laughing out loud. The lines are delivered so well that I actually didn’t miss traditional voice acting. It also helps that the game isn’t too long at all, about 10 hours if you explore as much as possible.

Half of what you’ll be doing in Voice of Cards is moving through the world and exploring. With the nature of the game being card-based, movement takes place on a grid-like system made up of cards. You use the left analogue stick to move a single space in a given direction, while you can use the right to select a space further away to jump to, as long as it has already been revealed. As you move, the cards around you reveal themselves, whether that be a place you can move to, a character, or a wall. I think the movement is pretty good, and the jump feature to previously revealed spaces eliminates the tedious hassle of backtracking. Although, there are sometimes restrictions in place, usually in caves.

As you explore the over-world and other places, you might sometimes encounter an event. These often involve selecting a choice that can either lead to benefits and even clues to treasure, or something bad can happen, like an enemy encounter. It’s a nice touch that helps to break up the gameplay loop of movement and random enemy encounters. There are also the odd side quests. These are pretty straightforward to complete and fairly standard in design.

It wouldn’t be an RPG without plenty of customisation for your party. There are five members for you to manage. Each can be equipped with a weapon, a piece of armour, as well as an accessory. These can be bought from shops in the different towns you visit, or can be found out while exploring. Defeating enemies nets you gold and experience, the latter of which levels your characters up. Levelling up not only improves your character’s stats, but can also unlock new skills and passive abilities to utilise.

The characters can learn plenty of skills to use, however, they can only equip four at a time. It’s a smart choice, as it requires the player to experiment and equip sets that are ideal for different situations. There’s also passive abilities that give characters useful benefits, like certain elemental resistance. For a relatively short RPG, Voice of Cards offers a good amount of customisation for players.

Combat for the most part is handled really well. It’s turn-based in design, where every participant takes turns depending on their speed stat. Alongside that, each character/monster has an attack, defence, and health stat. The damage inflicted is roughly the difference between the attack stat and the targets defence, which can also be influenced by different skill effects, exploiting weakness, etc. Another thing you need to be aware about is your reserve of gems. Aside from your character’s basic attack card, skills cost a varying number of gems to activate. Each time it’s one of your party member’s turn to attack, you gain a gem. Managing this reserve is key to your success.

It’s a fairly simple combat system that allows for reasonably straightforward fights. I quite liked it overall, and the dice roll aspect for certain actions added a nice amount of uncertainty and excitement. Do you gamble and hope the dice lands in your favour and freezes the enemy, or do you go for a more reliable option? I will say it can get a tad repetitive towards the end, especially if you have rubbish luck and get lots of random encounters in rapid succession. Combat can also be a bit too easy. I never lost a battle or boss, even the final one was a relative breeze as some skills are just so overpowered. Melanie’s Zero Elements can easily obliterate and one-shot most encounters. Coupled with her skill that adds two gems, you can win most fights by her second turn once you unlock it. Even bosses are a complete pushover because of this. I wish there was more challenge.

The card aesthetic really does shine in a lot of ways. Characters and the many different creatures are full of detail and personality. It’s just really vibrant and creative, and it suits the D&D inspirations pretty well. At first, the positivity surrounding the visuals extends to the environments, however, it does lose that charm pretty soon. It all becomes a bit dull after a few hours, where seeing the exact same design for trees, water, walls, etc, makes exploration monotonous. Furthermore, level design ends up being quite basic and uninspired as a result of the limited card design. It really is a double-edged sword. On the one hand, characters and the like look exquisite, but environments can be bland.

Last but not least, the music is truly beautiful. Some of the pieces really did remind me a lot of those found in NieR Replicant earlier this year. It has that similar style as a result of having the same composer involved. The song that plays in between chapters is a particular favourite. But the music featured in combat is great as well, where the upbeat tones are joyous and exciting.

When I first saw the trailer for Voice of Cards, I knew that it would be right up my alley. It delivers a solid RPG experience with a story that boasts witty writing and nice twists throughout. Combat and customisation is surprisingly in-depth and engaging for a shorter experience, however, it can be too easy as a result of overpowered skills. Similarly, the card-based aesthetic brings plenty to love visually, but it can also end up being far too repetitive and simple.

If you’re looking for a short RPG or love the work of Yoko Taro, then this will likely be a game for you. Voice of Cards: The Isle Dragon Roars might not blow you away, but it’s an endearing and worthwhile adventure, nonetheless.