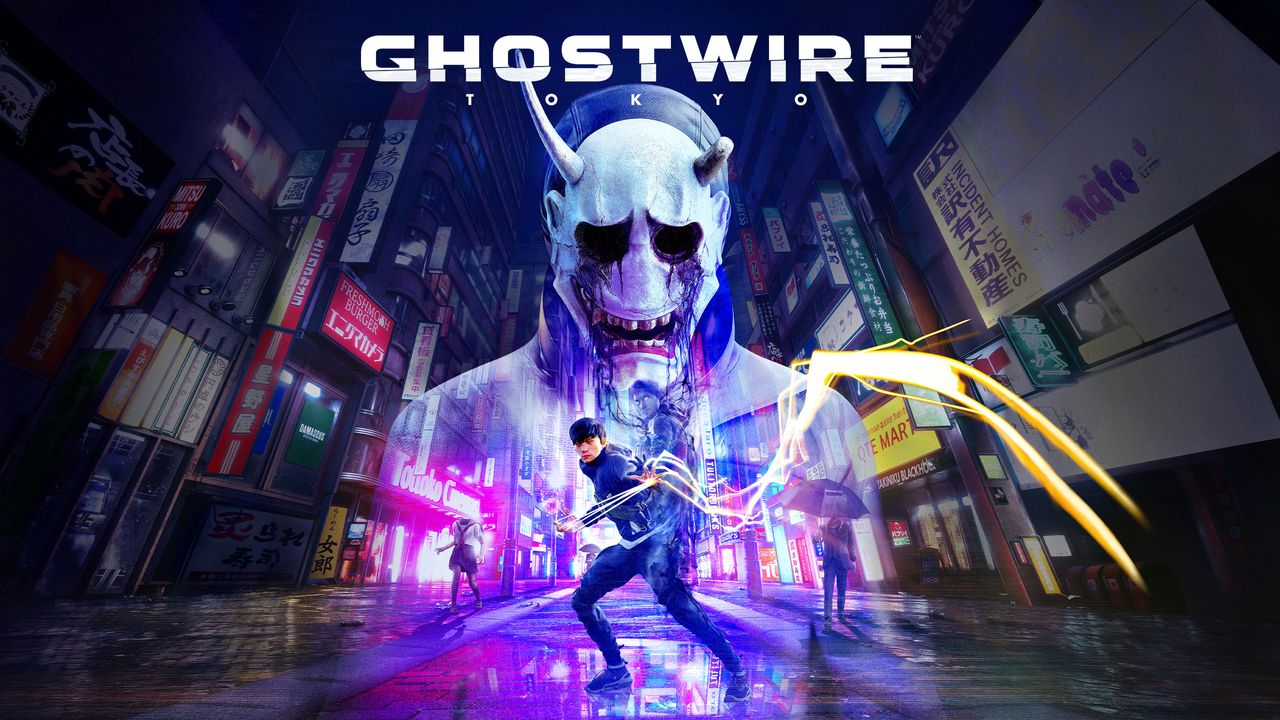 My interest in Ghostwire Tokyo leading up to its release fluctuated quite a bit. When its initial reveal trailer was shown back in 2019, I wasn’t enamoured with what I saw. However, as time went on and more of what the game would entail was revealed, the overall premise became a bit more intriguing.

When gameplay clips began to appear, it became clear that this was a title which would deviate from the developer’s previous games. Tango Gameworks’ prior releases were the third-person, survival horror titles, The Evil Within and The Evil Within 2. These were experiences filled with toe-curling terror that oozed tension. With Ghostwire: Tokyo, they have instead opted for a first-person, action-adventure that retains some of the eerie atmosphere and scares the studio is known for. In terms of my roughly 25 hours with the game, the compelling ideas end up getting let down by tedious design and fumbling execution. Let’s get into it!

Set in the towering, modern cityscape of Tokyo, you play as Akito, a man saved on the brink of death from a freak accident by a spirit called KK. By inhabiting, and sometimes directly possessing Akito, supernatural, magic powers are granted to him. However, Akito isn’t given much respite to understand his situation, as the citizens of Tokyo vanish. In their place, spectral entities known as Visitors now invade the city. With a masked man seemingly causing the dangerous situation, as well as kidnapping Akito’s sister, it’s safe to say the poor guy isn’t having the best of days.

You’ll play as Akito as you explore the city, fending off various dangerous spirits while searching for answers to what’s happening and finding your sister. What follows is a fairly standard, open-world adventure, with a supernatural twist. Unfortunately, Ghostwire: Tokyo just doesn’t end up being anything worthwhile.

For every open world game, the world itself is paramount to get right. Players will spending so much of their time exploring that making it interesting and memorable is so important. This version of Tokyo definitely has that initial air of wonder. With the tall buildings stretching into the sky, the bright neon lights, and the cluttered remnants of the missing inhabitants, it all makes for an intriguing setting. It’s a shame then that it all becomes quite repetitive and stale after a while.

Aside from a few locations like the forest, everything kind of just blends into one. There’s very little variety in design and surroundings which causes exploration to lack that sense of discovery or feel particularly interesting. There’s only so much wandering around similar looking streets and locales before it gets pretty dull, particularly when it takes place entirely at night and with frequent, murky weather. On the flip side, a fairly robust parkour system makes traversal relatively fun. There’s nothing like pulling yourself towards friendly, flying spirits, before scampering across rooftops and gliding between them.

When you’re not pursuing the mysteries of the main story, various activities can be found around Tokyo for you to engage with. These range from standard collectibles to proper side quests. When I say collectibles, I mean a literal army of spirits littering the map for you to save alongside a handful of others like shrines. These spirits are those people that have vanished, and they need you to collect them and send them out of the city via phone booths scattered around. Doing so grants you experience and money to spend on items and consumables. You constantly come across spirits while just going through the game, but for completionists, I really do pity you, as there is just too much, and it gets boring fast.

The side quests vary from the mundane, to actual really cool. They can tell pretty fascinating and often heartbreaking tales. A few in particular really stand out, including one that genuinely creeped me out. I won’t spoil it. However, one issue I did have is that some quests will follow up an interesting story with a boss/enemy that you’ve fought plenty of times before. You’d think the developers would want to really distinguish these quests. For example, I went through this location, learning about this particularly horrible entity. When I finally got to the end and encountered it, it was one I’d fought a bunch of times already. It’s anticlimactic to say the least.

Combat plays a significant role in Ghostwire: Tokyo, as you’ll be crossing paths with deadly beings on the regular. As a result of the bond with KK, you’ll be able to wield elemental powers in satisfying fashion. The different elements also carry benefits for different situations. Wind is rapid-fire projectiles that’s great for long range. Water strikes in an arc, perfect for managing close range groups. Fire explodes on impact, perfect for powerful foes and large groups at a distance. Quickly alternating between them is key.

Let me just say, the first-person perspective makes all the difference in making the combat all the more impactful. The snappy hand signs that Akito makes to use his powers are so satisfying. Furthermore, as you level up and gain skill points, you’re able to upgrade your powers for more depth, as well as other passive traits. It’s these aspects that I really love about the combat, however, a handful of other issues hold it back.

First of all, the controls aren’t responsive enough for such an action-heavy title. It just always feels sluggish and awkward. Even after changing a number of settings, it doesn’t fix the problem entirely. Lack of enemy variety also stands out quite a bit in my experience. You’ll find yourself fighting the same, small number of enemy types frequently. It gets tiresome fairly quickly, especially as their A.I. is quite basic. All things considered though, despite the issues I have, I can’t deny the combat has its underlying quality.

I think the problems I have with Ghostwire: Tokyo would not be as big of an issue if I thought the story was a particular highlight. Unfortunately, the narrative and its characters end up falling pretty short. The antagonist and his entourage – while having a decent backstory – leave a lot to be desired. The main drive behind the story is Akito’s sister being kidnapped. But you don’t engage with her beforehand, so as a player, I couldn’t care less. It’s weak writing and this would have been improved by having us spend time with her before the kidnapping.

Akito and KK especially are the two characters that really are the stars of the game. In fact, if I’m being honest, they pretty much carry the entire story. I wasn’t a fan of Akito at first, but he really grew on me after a short time, KK on the other hand impressed from the get go. But what I loved the most was the banter between them. They play off each other so well and quite frankly, their relationship is simply much more engaging and present than Akito and his sister’s. The second half of the narrative does pick up, with an ending that feels well handled and poignant.

One thing that’s obvious fairly early on is the lack of horror. For a developer like Tango Gameworks, where their previous games are known for spine-curling dread and unsettling imagery, Ghostwire: Tokyo is a stark contrast. That’s not to say there isn’t horror, however, apart from a scattering of scary sections, it’s not a key aspect. The best way to describe this game is an action-adventure with some horror elements. Either way, this is more of an observation than a positive/negative.

Visually, Ghostwire: Tokyo has plenty going for it. The developers have done an impressive job at making the city feel lived in, despite the lack of people. The streets are cluttered with various objects let behind by the city’s inhabitants. Vacant vehicles are abandoned everywhere, leaving an eerie atmosphere in its place. Textures and character models are a mixed bag, where the overall quality can be underwhelming, especially for a next-gen exclusive. Add to that the frequently unstable frame rate. The ray-tracing mode on the other hand works to great affect here, as bright lights and damp streets feed into it so well. It not only adds realism, but also depth to scenes and world.

As the saying goes, I’m not angry at Ghostwire: Tokyo, I’m just disappointed. The supernatural premise piqued my interest and drew me in. However, it ultimately squanders its potential with frustratingly mundane design choices. The story and the majority of its cast are forgettable, with Akito and KK doing their best to carry the adventure. Wielding the elemental is fairly satisfying, but it sways into repetition after not too long, aided by the lack of enemy variety. This monotony in design unfortunately seeps into the open-world gameplay as well.

I really did want to like this game more than I did, as it has some great ideas. But I can’t overlook the various issues that leave Ghostwire: Tokyo a mediocre experience. There will definitely be people that’ll enjoy it, but I’d recommend picking this up on a good sale if you’re indeed interested.